Niger Was Always There

The recent attention given to American activities in the North African country of Niger has prompted us to highlight the land, the people, and the importance of this remote desert region.
The land is one of the oldest cratons in the geologic formation of the earth. This Sahara region has morphed many times from dry to wet to dry again, controlled by prevailing currents that changed and concealed ancient river beds and underground lakes, including a lost northern source of the ancient Niger River. The present topography contains a northern plateau with shifting Ergs, and the eroded peaks and valleys of the A’ir Massif. The southern part gives way to the grassy plains of the Sahel near the southward bend of the Niger River.
The peopling of Niger began near the origins of mankind. For more than a million years, waves of hominids and humans migrated in and across the region on pathways to populate every part of the earth. In Niger and surrounding areas, we see vivid rock carvings to witness these early experiences. Even now we find the remains of turmoil erupting from past and present conflicts between Berber, Hausa, Fulani, and Sunni inhabitants.
The geographic importance of the land lies in the trade routes. Links emerged in the last millennium involving exchanges of salt, gold, weapons, and documents crossing in both directions from the Mediterranean to Timbuktu, guided by lines of caravans often numbering more than 1000 in a group. Indeed this route also bore the grim paradox involving human trafficking of both scholars and slaves.
Presently, the active centers of interest are Agadez in the north, prominent since the middle ages, and the current capital Niamey on the southern Niger River. In these places, we find the past and present links to global networks involving terrorist recruitment, drone bases, and large uranium deposits.
Here and now, the Afriterra Library brings into focus ten important historical maps depicting this region over a 500 year span, and well before certain borders distorted our view. Please study these images and share every thought and insight you gain in this hands-on expansion of the world experience. 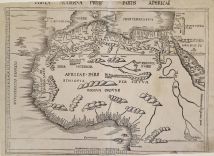